“First the tide rushes in,
Plants a kiss on the shore,
Then rolls out to sea
And the sea is very still, once more”

The tide has certainly come rushing in for a select group of asset classes in 2016. Their sharp upward climb has been inspired by a shift in monetary policy sentiment from the U.S. Federal Reserve from hawkish to dovish starting in January. But after planting a rewarding kiss on investor shores, will these very same asset classes roll back out to sea once the Fed resumes a more hawkish policy stance?

First The Tide Rushes In

A select group of asset classes and market segments have been performing exceedingly well since late January 2016. And they all share one key distinction in common — they are all securities that provide high yields for income starved investors. These include the following: 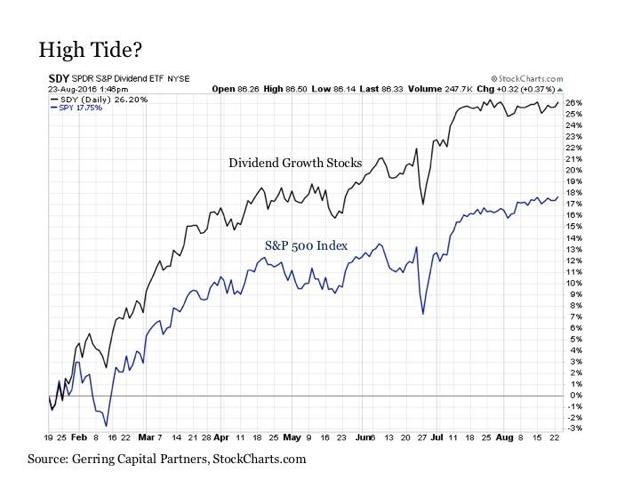 Then Rolls Out To Sea

Of course, all of these categories share the same distinction in common. They are interest rate sensitive. And their recent performance leads to an important consideration. If they have all risen to varying degrees over the past seven months thanks in part to a more dovish turn by the Fed including the notion that interest rates would stay lower for longer, how well should we reasonably expect them to fare if and when the Fed takes a more hawkish turn (potentially very soon if not already underway) and effectively dispels the notion that interest rates will stay lower for longer. What categories are set up to perform well, and which might struggle?

Who Will Stand Naked?

The first thing that needs to be established is the following: All of the above categories are already overvalued, with some priced at greater premiums than others. Even badly skewered master limited partnerships (NYSEARCA:MLPI) are still rich by historical standards thanks in part to the still scrambled state of the underlying energy business and the fact that a number of firms in this area of the market had no business being formed as MLPs in the first place. Everything is expensive, so we should not rely on absolute valuation to provide a salve to the pain of potentially higher interest rates in the months ahead.

Second, most of the above categories are more expensive today than they were at the start of the year. First, Treasury yields are essentially back to the lows they reached in February 2016, so it’s not as though yield spreads have become substantially better along the way. Instead in many cases, they have become narrower. Moreover, corporate earnings have deteriorated measurably (the “E” in the P/E ratio has shrunk in many cases) and default rates have risen to levels that historically have been a cause for meaningful concern.

So with these two points in mind coupled with the fact that even more monetary firepower has been exhausted by global central banks over the past seven months (although the Japanese appear to be gearing up for yet another round of door busting stimulus this fall), it would not be unreasonable to presume that the tide of a more hawkish Fed could return these categories at least to where they first came before the Fed’s latest dovish turn. After all, if a price rises based on the notion that something is not going to happen, it could reasonably fall back to the price from which it started when it becomes likely that this same something is actually going to happen, particularly when the conditions supporting that price have become measurably worse in many cases along the way.

With this in mind, the following is a brief review of what we might reasonably expect given a more hawkish turn by the Fed. Recognizing that these are yield generating instruments, the income provided by these securities have been stripped out to focus exclusively on price and avoid overstating the potential downside under this framework (after all, investors will not be forced to pay back the dividends and interest received to date!).

The set up here is somewhat more constructive at least in the intermediate-term for a more hawkish Fed scenario. While dividend growth stocks have certainly surged amid the hunt for yield since the start of the year, they have behaved well technically in the months that have followed, first breaking out above pre-hawkish resistance in mid-May and retesting this level a few times before continuing its advance. Moreover, recent gains among this select group of stocks has been supported in many cases by more predictable and defensive earnings and dividend growth. So while the segment is expensive and exposed to the potential for a solid pullback if and when the Fed reverses course, an initial pullback in the -8% to -10% range would certainly not be catastrophic. Of course, investors should beware of momentum building to the downside from current levels, as a -21% decline would be required to retest its February lows, which would hurt quite a bit more. 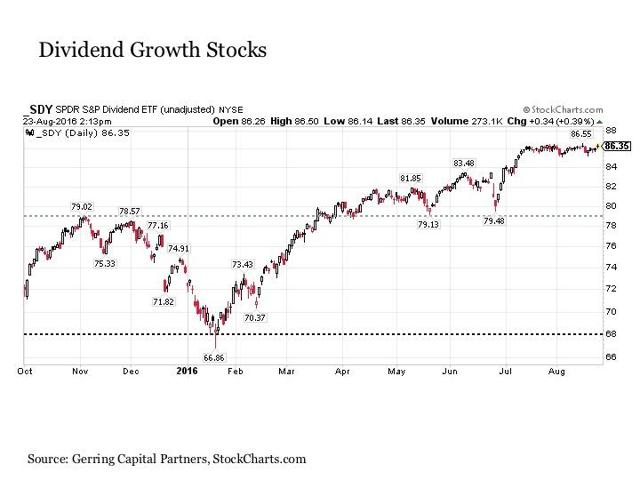 Other Stocks Of Quality

A similar set up exists for its equity market brethren in the consumer staples, utilities and REITs. Initial declines to previous resistance and current support would be in the -7% to -10% range. But an acceleration in momentum to the darker hawkish days of early 2016 would lead to more measurable declines more in the -15% to -20% range. 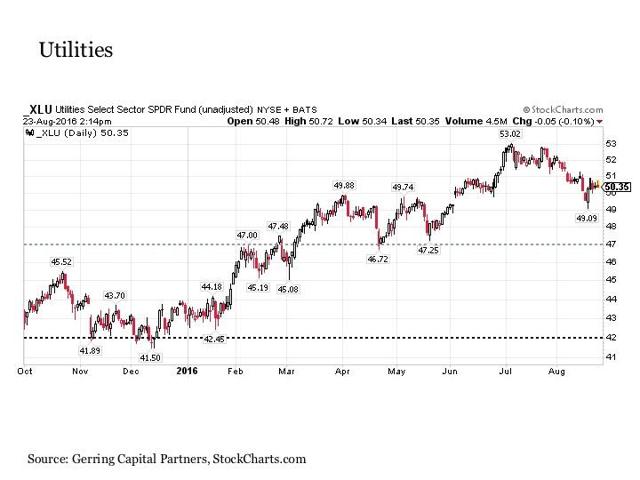 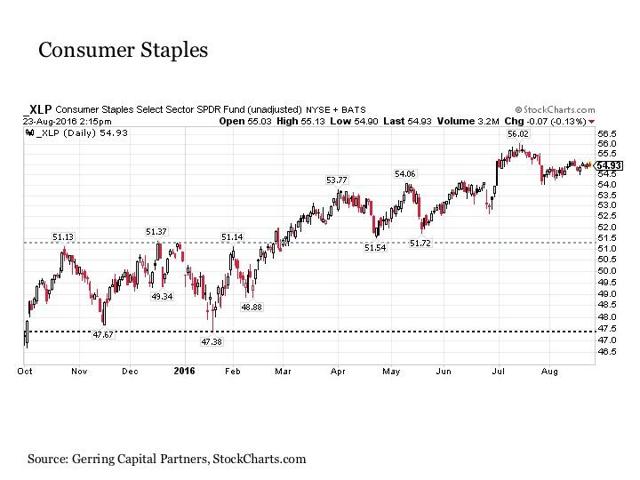 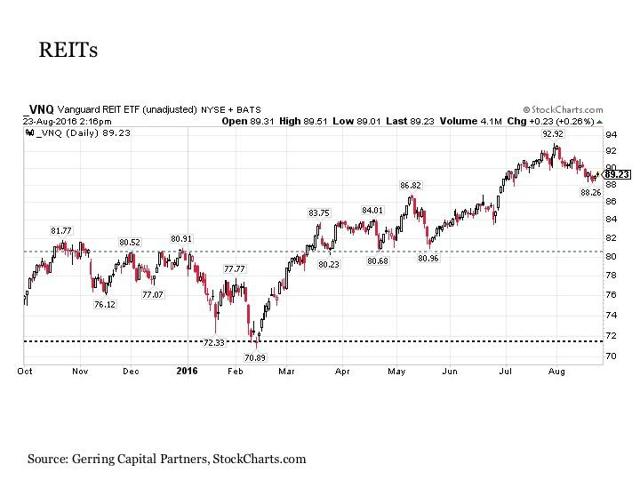 These are the more constructive scenarios, although they still include measurable downside risks. But while they are all stock indices and thus investors are down at the bottom of the capital structure, they all consist of higher quality issuance. In short, an AA rated stock can often provide far greater price stability than a B or CCC rated bond.

In all of the above categories as well as those shown below, it should be noted too that security selection can meaningfully add value over the broader index benchmarks.

In the middle of the road is the following:

Preferred stocks face a potentially more challenging outlook amid a switch from a dovish to hawkish Fed. This is not a knock on preferred stocks, as I own several and intend on continuing to own them. But it does highlight the importance of being selective in the preferred stocks that you own to protect against the potential for downside risk.

Preferred stocks do have reasonably well established support just above $39 on the PFF. But if Fed hawkishness starts to really take hold in the market, the next logical stop would be in the $37.75 area. And if conditions start to deteriorate further in the high yield bond market and spread, then a retest of February lows at $36.25 or lower cannot be ruled out. While a current worse case scenario of a -10% decline is not disastrous, it is coming in an asset class of preferred stocks where in many cases it can represent two-years worth of yield in a category where many of these securities are potentially callable within that same period of time. If you purchased at a discount, this is not a problem. But if you bought at a premium, it can be salt to the wound. 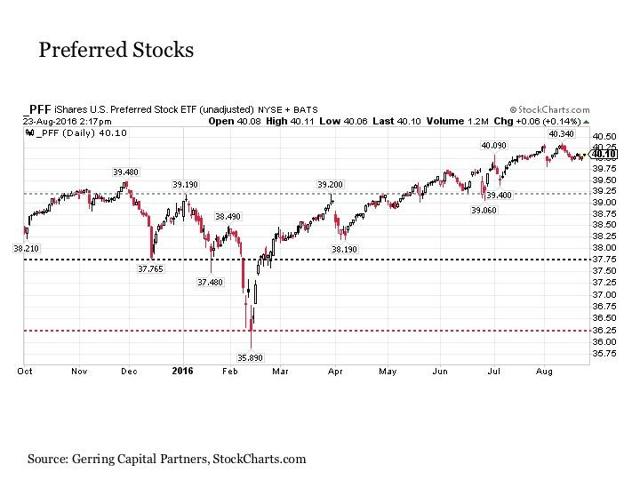 Moving on to the more troubling side of investment market shores, we begin with the high yield bond market. Prices were streaking lower in the high yield corporate bond space once the Fed turned hawkish in 2015, and plunging oil (NYSEARCA:USO) prices certainly did not help either, but they rallied impressively once the Fed turned dovish. But along the way, credit quality has deteriorated further and default rates have spiked yet spreads are no wider than they were before. As a result, high yield bonds are at a much greater risk for a downside move in the event of a hawkish turn at the Fed. This is particularly true if oil prices go sliding to the downside as well. 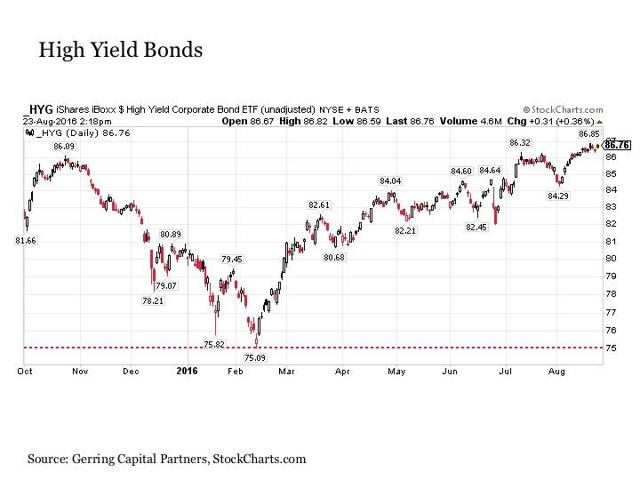 A similar set up exists for both convertible bonds and master limited partnerships. 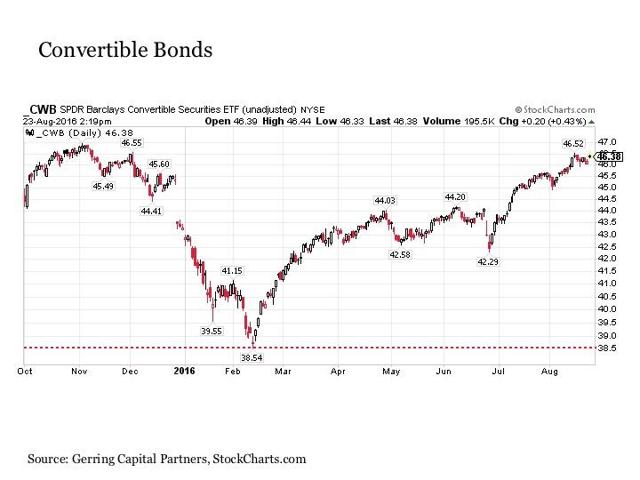 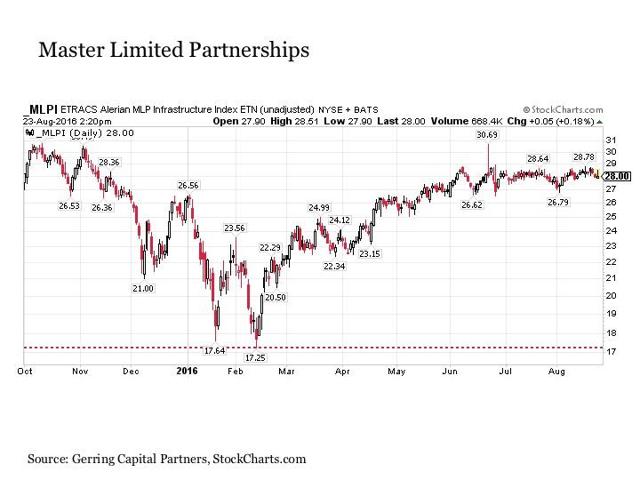 In the case of high yield bonds and convertible bonds, declines in the range of -15% or more simply to retest previous February 2016 lows should not be ruled out. As for master limited partnerships, the potential downside could be much more profound and will be dictated just as much by the direction of oil prices. But for reference, a near -40% decline would do nothing more than retest February lows.

The last stop is emerging market bonds. While the story at first appears more constructive like its stock market counterparts above, it is more troubled upon closer investigation. This is due to the fact that emerging market bonds have surged so far in such a short period of time despite what are mixed fundamentals at best and generally poor fundamentals in reality across much of the emerging world. The category has surged by more than +14% since the February lows, which is a big move for the asset class, and spreads in this higher risk area of the market have become notably tighter as a result. If the U.S. dollar meaningful strengthens along with any hawkish turn by the Fed, this is a category that looks particularly precariously perched in the current market environment. As a result, investors could see a few years worth of yield given back in a hurry if sentiment changes for this notably frothy asset class. 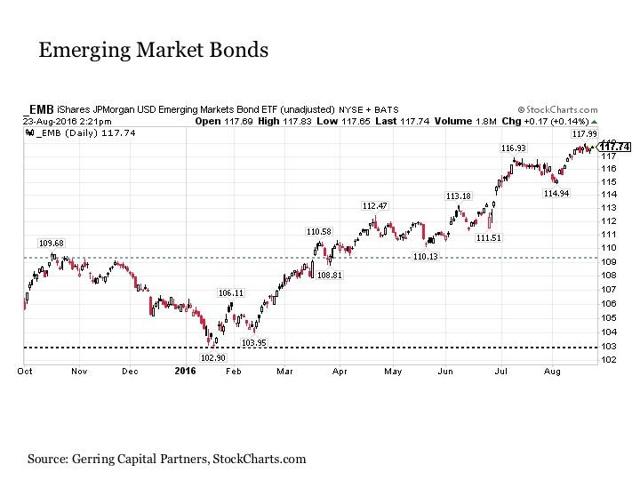 Perhaps you have participated in the tide rushing in across these various high yielding asset classes in 2016. If you have, or if you are positioned in these categories today, it is important to recognize that the primary driver of these price gains has been the perception of a more dovish Fed. And knowing that the Fed has lately been making a more concerted effort to project a more hawkish tone, risks are rising that the hope of persistently low interest rates that helped lift these asset classes may soon reverse to opposing forces.

As a result, investors in these categories would do well to pay close attention to the words coming out of the Federal Reserve between now and their next FOMC meeting on September 20-21. This includes their latest annual symposium in Jackson Hole later this week. For if the Fed begins to show more hawkish resolve, it may pose measurable downside risks for these recently strong asset classes.

Disclosure: This article is for information purposes only. There are risks involved with investing including loss of principal. Gerring Capital Partners makes no explicit or implicit guarantee with respect to performance or the outcome of any investment or projections made. There is no guarantee that the goals of the strategies discussed by Gerring Capital Partners will be met.

Disclosure: I/we have no positions in any stocks mentioned, and no plans to initiate any positions within the next 72 hours.

I wrote this article myself, and it expresses my own opinions. I am not receiving compensation for it (other than from Unique Finance). I have no business relationship with any company whose stock is mentioned in this article.

Additional disclosure: I am long selected dividend growth, consumer staples, utilities and preferred stocks as part of a diversified asset allocation strategy. I also hold a meaningful allocation to cash at the present time.